The number of students in the best animation VFX institute in Rajkot for VFX courses is increasing.  VFX is an acronym for visual effects. It is used in multiple places, but the most common use of VFX is in films. It adds life to movies by making some unbelievable scenes believable. VFX compositing & editing course covers all major types of visual effects that are used in movies.

Whether out of curiosity or to pursue the right VFX course, if you are interested in exploring more about VFX, you must know the major types of visual effects used in films.

These are three major types of VFX used in movies. If you want to make your career as a VFX artist, then you must take a VFX compositing & editing course in Rajkot that covers these major VFX types.

Tremendous Scope of a Video Editing Career in India 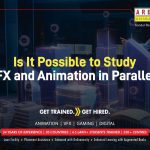