3d animation is usually loved by all-aged people. Of course, kids are major followers of animated movies, but even the elderly would smile at adverts, commercials, and movies at times. This is the reason 3d animation courses are in mounting demand.

It is fun to watch the animation, have you ever wondered about the 3d animation process?

Here is the stepwise process of 3d animation. 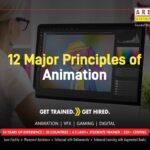 Difference Between 3D and 2D Animation