The game design process and development is a complex process. It involves building a world and populating it with characters, landscapes, objects and much more.

Many students pursue a game design course from popular game design institutes. Creating captivating and beautiful games having the perfect look, feel, and play is never easy. Game designing and development is quite complex and involves several bottlenecks even for a professional who has studied at the best game design institute. Thus, knowing the right approach can help gaming professionals to simplify a complex process.

The Process of Game Design Consists of Three Main Stages

Each of these 3 stages consists of a subset of more specific stages.

This stage occupies 20% of the overall game design process.

This is the main stage of the game designing process where a major portion of the work is done. It forms about 60% of the entire design process.

If you are searching for a game design institute, you will encounter many of them. Pursuing a game designing course from Arena Animation Rajkot is the best way to start your journey in the gaming field.

Career Opportunities in Animation in 2022 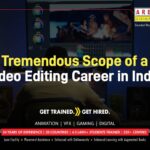 Tremendous Scope of a Video Editing Career in India